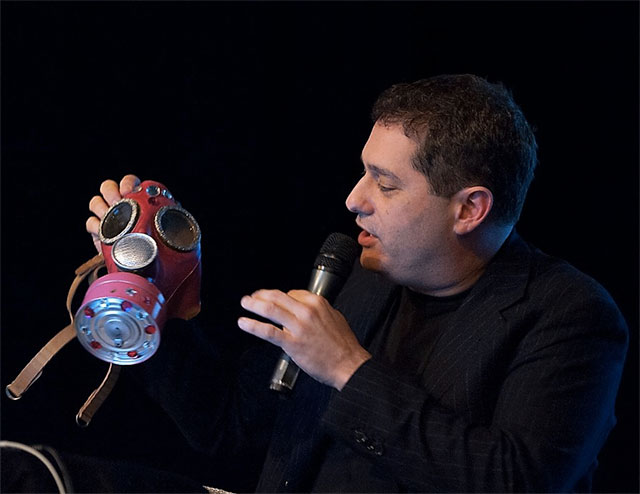 Larry Bogad, Thorne Dreyer's guest on Rag Radio, is committed to "speaking mirth to power." He has been called "the love child of Lenny Bruce and Saul Alinsky," and, according to Truthout, his "artful activism blends the strategies of civil disobedience with heaping doses of Harpo Marx."

UC-Davis professor L.M. Bogad, who was co-founder of the Clandestine Insurgent Rebel Clown Army, is the author of "Tactical Performance: The theory and practice of serious play," which analyzes and critiques the use of guerrilla theatre, activist art, and pranks for human and civil rights, and for social justice, labor, and environmental campaigns, and "Electoral Guerrilla Theatre: Radical ridicule and social movements," which tells the stories of performance artists around the world who run for public office as a radical prank.

On the show we talk about Larry's amazing history as a teacher, theoretician, agitator, and street performer, working at the intersection of performance and activism. He also provides some fascinating history of "creative resistance" from the Dadaists, to the radical theater of the Yippies, to the use of "tactical performance' in the Civil Rights Movement.

L. M. (Larry) Bogad is an author, performer, educator, and the founding director of the Center for Tactical Performance. He is Professor of Political Performance at the University of California at Davis where he mentors graduate students and teaches classes such as "Satire, Irony and Protest," "Tactical Performance," and "Oppositional Performance and Social Movements." Bogad's plays have covered topics such as the Egyptian revolution, the Haymarket Square Riot, the FBI's COINTELPRO activities, the Pinochet coup in Chile, and global climate chaos, and he has performed on picket lines as Saint Francis, the Angry Banker, and Sam Walton. He has also performed original work such as "EconoMusic: Keeping Score" in venues from Helsinki to São Paulo to New York City, from major museums to a squatted military barracks in Barcelona.

Rag Radio (www.theragblog.com/rag-radio/) is produced in the studios of KOOP 91.7-FM, an all-volunteer, cooperatively-run community radio station in Austin, Texas, in association with The Rag Blog (TheRagBlog.com) and the New Journalism Project, a Texas 501(c)(3) nonprofit. The host and producer of Rag Radio, Thorne Dreyer, is a prominent Austin-based activist and writer who was a pioneer of the ’60s underground press movement. The show’s engineer and co-producer is Tracey Schulz and the staff photographer is Roger Baker. The syndicated show is broadcast (and streamed) live Fridays, 2-3 p.m. (Central) on KOOP (www.koop.org/listen-now), and is later rebroadcast and streamed on WFTE-FM in Mt. Cobb and Scranton, PA., on Houston Pacifica's KPFT HD-3 90.1, and by KKRN, 88.5-FM in Round Mountain, CA -- and as a featured podcast at Veterans Today (VeteransToday.com). Contact: ragradio@koop.org. Running time: 55:09.